Crouching unsuspectingly, overlooking the city of Tulsa and with a bird’s eye view of the Arkansas River, Harwelden Mansion’s rooftop dwellers have been quietly observing the passing of years.  From this vantage point, these sandstone dogs have protected the occupants of 2210 S Main in Tulsa from spirits lurking above since 1923.

Although called gargoyles on the original blueprints of the English Tudor-Collegiate Gothic home, there are five creatures who are distant descendants of grotesque,  frequently found on medieval churches, chapels, and other buildings that frequent gothic structures.  Grotesques are one-of-a-kind sculptures that can be fanciful or terrifying depending on the artists depiction.

Gargoyles, which carried water, and grotesques, which were an ornate adornment; have a long architectural history, primarily on cathedrals, that reached their peak of popularity in late medieval Europe.  Each one was uniquely crafted by artisans of the times and were intended to scare away evil spirits from the buildings.

“They were most common in France and England but proliferated throughout western Europe.  Harwelden’s creatures are not literally “grotesque.” If intended to be dogs, they were the domesticated animal found most frequently in medieval art.  Among the exotic animals not native to western Europe, the lion was most often depicted. They would have conveyed iconographic connotations to a largely illiterate audience,” shared by  Dr. Janetta Rebold Benton, an American art historian and author of “Holy Terrors: Gargoyles on Medieval Buildings.”  She is currently Distinguished Professor of Art History at Pace University in New York City.

Four of Harwelden’s rooftop sculptures are identical.  Each pair, flank the two fireplace chimneys which are observed easily from the 2nd floor rooftop terrace.   The canine sentries are 15 inches high and bear a shield decorated with a basketweave etching between their paws. 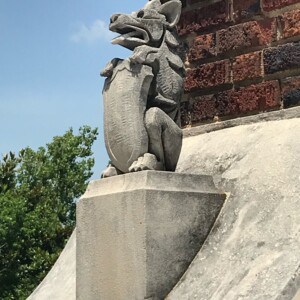 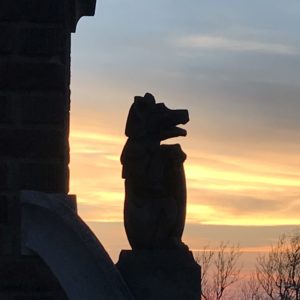 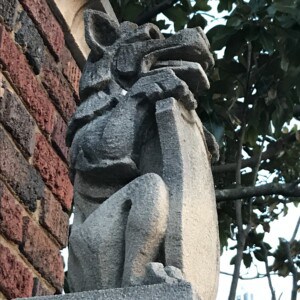 The fifth, and largest creature, stands in an extraordinarily more prominent position on a 3-foot baroque twisted Solomonic pillar, centered between two chimney stacks towering over the 2nd floor roof of the Harwelden Mansion. The front view, hidden for decades behind an espaliered magnolia on the south side of the Mansion, holds a uniquely different coat of arms with a bend (broad diagonal band) from upper left to lower right.  The field is divided into quarters; a common practice in heraldry to join the crests of familial lines or to differentiate the bearer. 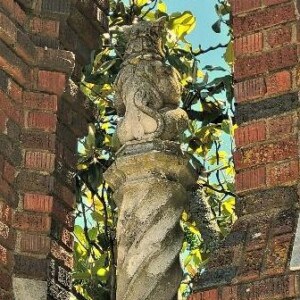 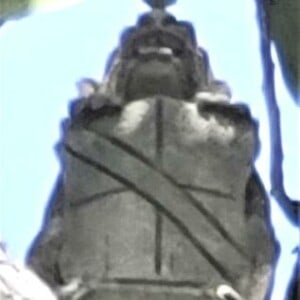 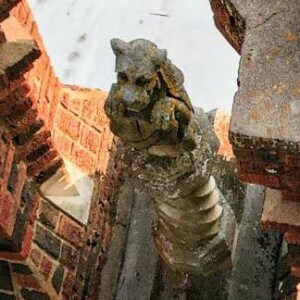 Although not “grotesque” the Harwelden rooftop dwellers have seen many charming, fascinating, spine-tingling and spectacular occasions since 1923 and have beautifully withstood nearly 100 years of Tulsa time and weather – just as the rest of the home was designed to endure.

Other Gargoyles can be seen on the Philtower Building: 427 S Boston Ave, Tulsa, OK 74103 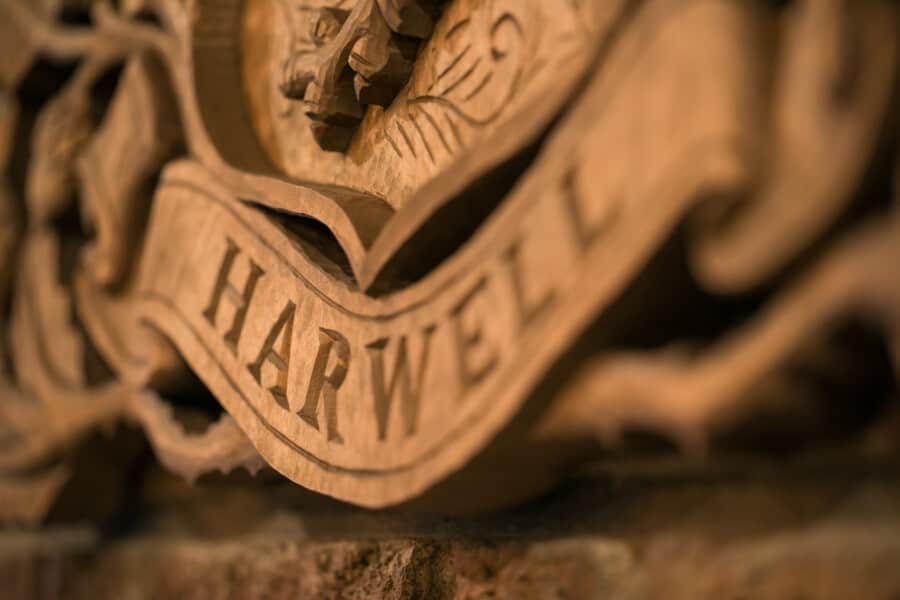 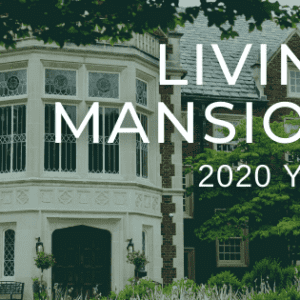